PC3 songs can make you laugh, think, feel, dance, jump, and more… sometimes all at the same time. Songs that are struggling towards truth with a smile and a broken prayer. Honest songs about life and a loving God. 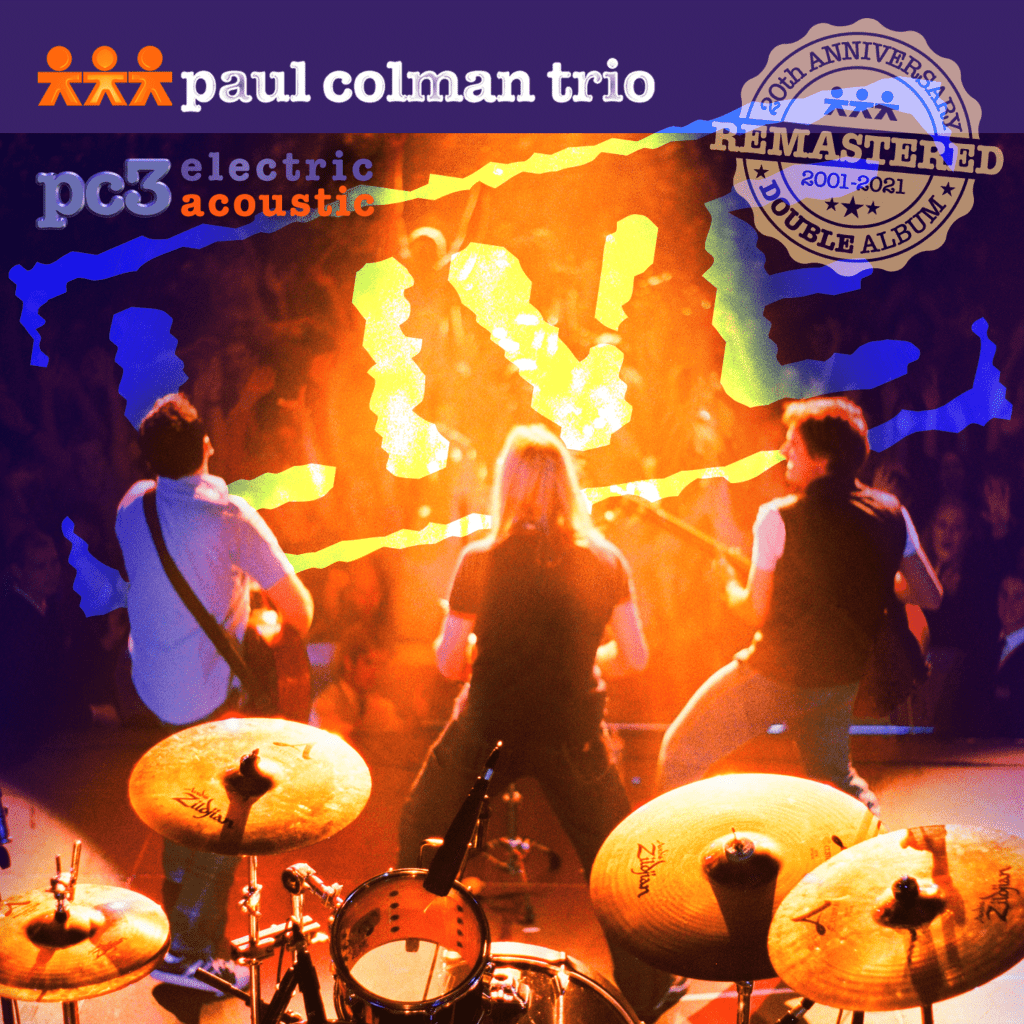 Previously available for purchase only in the Compact Disc format since their indie release in 2001, Paul Colman Trio’s two serious fan favourite LIVE albums have been lovingly remastered and re-released for the digital age as a 22-track double album
“PC3 LIVE Electric/Acoustic”.

Originally released as a VHS cassette, 2001’s video collection of 14 live songs, behind the scenes footage and 3 song videos clocks in at just under two hours of seriously fun viewing. Reproduced from the original video master and now in stereo, “The Video Collection” has never looked or sounded so good and wonderfully captures PC3 at their peak.

2001 was a busy year for the Paul Colman Trio (PC3). The little Melbourne band that sprung from obscurity only two years earlier was stretching the limits of what an indie “CCM” band could do within Australia and New Zealand. With two self-released and self-distributed studio albums that sold beyond all expectations, a sold out tour of Australia, various festival headlining slots and numerous Aussie/Kiwi radio hit singles behind them, PC3 knew that the next album release would be an important one.

Important, but (ultimately) obvious. The growing number of “serious fans” and the band themselves knew that – while the two studio albums to date “Serious Fun” and “Turn” certainly worked – it was LIVE, in concert that the band connected best. With multitrack recordings of several of 2000s “Turn Tour” of Australia concerts and two, exclusive 2001 shows in their home city of Melbourne in the can, the decision was made to release a live album.

But why release just one live album when you could release two?

Born from necessity and an unrelenting willingness to perform anywhere, anytime, in any sized room, for any crowd with any type of PA system (or none) Paul, Grant and Phil had found themselves with two distinct approaches to live performance. As the smaller, unplugged “acoustic trio” or delivering their bigger “electric” sound (often with the support of some excellent, auxiliary musicians) PC3 were equally comfortable in either configuration.

Sometimes they were just their three voices, acoustic guitar, acoustic bass and drummer Phil on nothing but a snare with brushes. Sometimes PC3 were fully plugged, amped, electric and expanded to a four, five or even six piece. Other times they were somewhere in between but, clearly, PC3’s live performances had two distinct sides.

And so, in late 2001, two separate “PC3 LIVE” CDs – “Electric” and “Acoustic” – were released simultaneously. Two distinct yet complimentary representations of PC3 in concert. Capturing that special brand of PC3 energy, emotion, seriousness, fun and spontaneity, the live recordings of well-known radio hits, fan favourites and a few previously unreleased songs fed the growing desire for new PC3 recordings. But things were about to change.

Soon after the original release of the LIVE albums, PC3 relocated to the USA. The next two albums were released globally through the Essential/Provident label. The freedom and artistic autonomy of the indie years seemed to be becoming only a memory.

In 2021, the twenty-year anniversary of the original release, we can again enjoy the Paul Colman Trio – Paul Colman, Grant Norsworthy and Phil Gaudion, PC3 – performing LIVE and in their exciting, energetic prime during those early indie years.